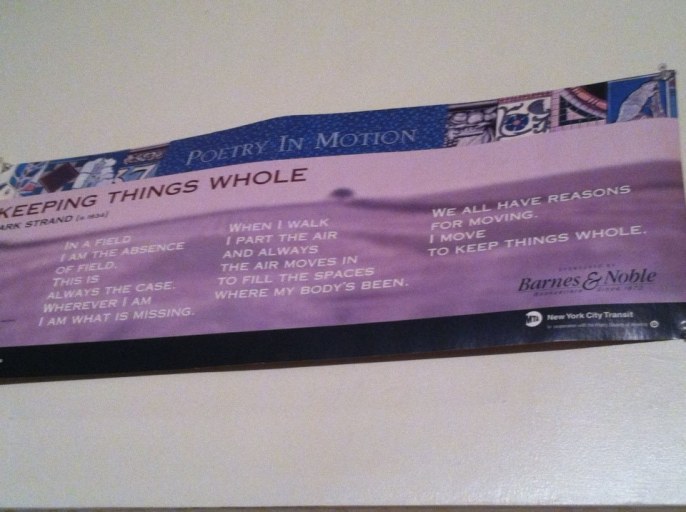 “We all have / Reasons for moving.” — Mark Strand

I gathered up my nerve and moved to New York City for the first time right after grad school.  I was lucky my friend Purvi was looking for a roommate; her cozy, furnished apartment (where I had stayed on many visits to New York) and month-to-month rent made the idea of a big move and a big city less intimidating. A purple “Poetry in Motion” poster hung (and still hangs) in Purvi’s lovely living room, and my eyes rested on Mark Strand’s poem, “Keeping Things Whole,” each day that year.

In 2003, a year after moving in, I left Brooklyn for a writing fellowship in colder Western Mass. I moved a lot in those years–in 2004, 2005, 2008, 2009, and 2011–across hundreds of miles, often across states, mostly for academic jobs or fellowships.  But I also moved, perhaps, because I was not ready to stop moving, even though I simultaneously craved stability.

Strand’s lines resonate with me as I look back at that time and contemplate the future.

His death this past weekend, on November 29, 2014, set me thinking about “Keeping Things Whole.” I glance at Strand’s poem often still (without fully reading it each time, because I use the above image as the cover photo for a Facebook group I created for local writers in Rochester).

“In a field
I am the absence
of field.
This is
always the case.
Wherever I am
I am what is missing.
When I walk
I part the air
and always
the air moves in
to fill the spaces
where my body’s been.
We all have reasons
for moving.
I move
to keep things whole.”

Having just completed a poetry unit with my freshmen, I wonder what they would have made of this poem.  I might share it with them this week and also Strand’s words below–his take on the sense of mystery in poetry and in his poems in particular:

“If I were absolutely sure of whatever it was that I said in my poems, if I were sure, and could verify it and check it out and feel, yes, I’ve said what I intended, I don’t think the poem would be smarter than I am. I think the poem would be, finally, a reducible item. It’s this “beyondness,” that depth that you reach in a poem, that keeps you returning to it. And you wonder, The poem seemed so natural at the beginning, how did you get where you ended up? What happened?”

–Strand, in a Paris Review interview

Thank you, Mark Strand, for the gift of this “beyondness” in your poems.  It has kept me coming back.